There is an old saying that  "Acadians are born with songs in their veins and music on their fingertips."

The Le Blanc family and it's descendants  have a unique history, rich in music and strong ties to the community.  Their love of music was passed
from one generation to another.

The Le Blanc Legacy introduces others to the  music of Eloi Le Blanc, "the Grandfather of Acadian Fiddle" as well support the love of music
through scholarships, contests and events.  Learn more about our current projects. 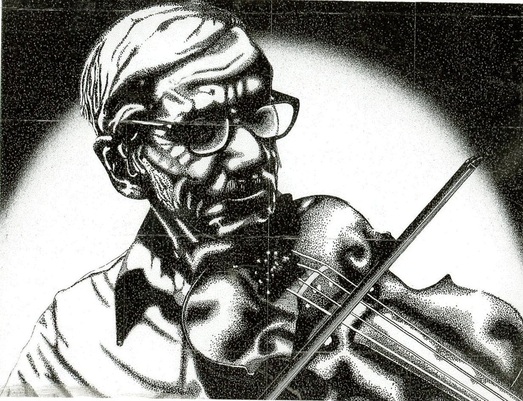 Eloi LeBlanc was born in College Bridge, New Brunswick on November 26, 1909, died June 21, 1978 in Beaumont and was buried in Pré d’en Haut. He started playing fiddle at an early age, inspired by his fiddling maternal grandfather and uncle. Throughout his lifetime played for local dances and weddings, getting the nickname “The Fiddler of Memramcook Valley”. He had a phenomenal memory for tunes as well as a great knack for composition. Many of his tunes live on thanks to other fiddlers such as Den Messer who made them even more popular. He performed with Bob White’s Moncton Ploughboys, then on the Maritime Farmer’s radio show, and finally joined up with Kidd Baker and the Pine Ridge Mountain Boys in Ontario. He stayed with this band for 12 years and spent the final years of his life living with his sister Laura who was also his piano accompanist. Eloi recorded only one record album, “Eloi and his Fiddle” (Eloi et son Violon) on Les Productions Acadiennes LPA-1001-1977. Some of his tunes include: Le Reel de l’Hiver, Anne Marie Reel, Reel des Maritime Farmers, Narcisse à John (named after his maternal grandfather), and Eric à Théotime à Six Pouces (named after his uncle).  In 2002, Eloi Protais LeBlanc earned a posthumous Hall of Fame Country Music, New Brunswick induction.   To read more.

His Music
Powered by